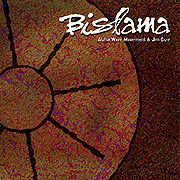 Bislama is the first collaboration between the unlikely duo of Alpha Wave Movement (aka synthesist Gregory Kyryluk) and overtone singer Jim Cole (of Spectral Voices). On paper this album seems like an odd match; the pairing of an electronic musician steeped in modern rhythms with a vocalist disciplined in the enigmatic practice of throat singing. With this wonderful release, the pair successfully combine their talents into something more than each is capable of on their own.

Theoretically, the influence of Bislama has been the culture and music of Micronesia. The music and mood absolutely reflect this through Kyryluk's imaginative use of sounds and tones both electronically manipulated and synthetic in origin along with Cole's wonderous singing and chanting. Ceremonial bells ring, exotic percussion rumble, gamelan rhythms cycle, all beneath a varying layer of floating synth pads and harmonic vocal improvisations. But the idea of this album is deeper than its cultural sources. Bislama is a metamorphasis of talent, sound and music derived through collaboration and improvisation. The two have created an album stylistically unique and complexly diverse.